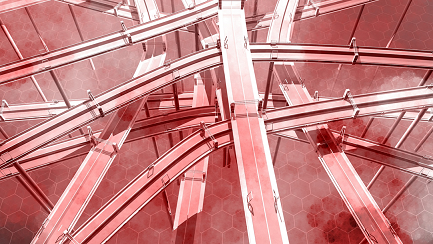 “Change is a constant!” I have lost count of how many times I have been saying that, with eyes rolling up and body shrugging in resignation to the inescapable action of the tidal forces of variation always in motion in our complex world. For a short while I even believed I had coined the expression, as one of the fundamental laws regulating any business truly immersed in the real world, but lately I have been reconsidering my position.

You see, studying the world of Data (please note the absence either of a qualifier of magnitude, “Big”, or of the perpetual and futile rant about how many zettabytes per second the Internet produces) and on the back of years of “Change” management experience, I now believe that change not only is not a constant but it is in fact a vector (ok, cheating a bit, it is a vector field, but let’s keep it simple).

Vector (ˈvɛktə) – noun- “a quantity having direction as well as magnitude, especially as determining the position of one point relative to another”.

So, just for a minute, let me indulge in this harmless intrusion of physics into business, the comparison of an intended strategic change, data driven, to a vector with starting point, magnitude and end point, and maybe, at the end, you might find yourself with another arrow (accidental pun!) in your communication quiver, to use in whatever “elevator speech” you might happen to give.

Starting point, the so called “As-is”, getting to the end point will crucially depend on the precise determination of who and where you are. As referred to in other blogs of mine, this is necessarily function of the ability of one company to define oneself through its own data (and metadata), assumed up to date and of high quality. A complete, contextual and current description of every single facets of the company through its data, from its physical infrastructure all the way up to its semantic relationships, passing through its data and operational layers, with people processes places et cetera, it’s the not-so-utopian-anymore prize that should repay all enormous efforts to become a data driven company.

End point, or “To be”, interestingly here, in function of the ambition and forecasting ability, you might see a closer end point as “tactical”, a bit more distant one as “strategic” and a far one as “visionary”, but it is equally important to define this point in terms of transformation of the vital parameters of a company (big Y’s, KPI’s, outcomes, etc.): therefore this is the place where your predictive analytics or whatever data science you have unleashed on data ponds-lakes-oceans should come handy, inferring where you are going to land now that, as per above, you know exactly where you are.

Finally magnitude, function of commitment, diligence and resilience, I would define this as a Company Energy over Time (i.e. power: resources, budget) that accumulates in momentum, and allows the crew to maintain a steady prow and reach the end point as safely and predictably as possible.

Note for the Agile fanatics: of course a long vector can be broken up in the sum of many smaller vectors, but I believe the logic still holds.

Thus we are left with just one thing “Change Taming”, or rather becoming proficient at having your change vector overcoming all the other change vectors (e.g. regulatory change, process change, competition pressure, people turnover, etc.) that might, from time to time, push you off course, and I hope you gleaned from this 600 words of mine, that I believe that Data Management Sciences can dawn a new era of Change Management, it is not a journey for the faint hearted, but where this increasingly Digital world is going, it might be just what we need.

Let us know your views,

Roberto Maranca has been working for Nissan, Ford and for the last 16 years he has been part of General Electric Capital big family. As Director for Enterprise Data of their International Division he has been overlooking the implementation of Data Governance and Quality framework, spanning from supporting risk model validation to enabling divestitures and leading their more recent Basel III data initiatives.