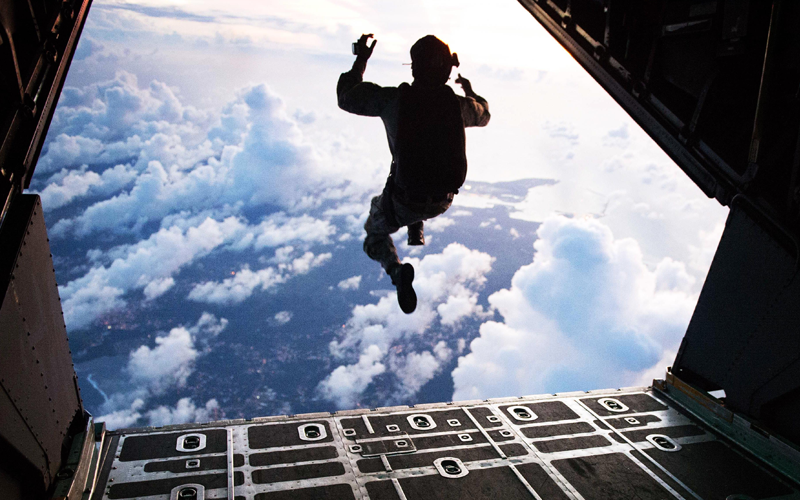 Imagine – you’re on an airplane flying at 13,000 feet. From this perspective, the world below looks far away; objects on the ground are small and out of focus, clouds are blurring by, and you can feel the adrenaline pumping through your veins. As you adjust the parachute straps firmly on your shoulders, you begin to question the decisions that led you to this moment – Why on earth am I doing this? This is scary. This is stupid. I should be safe at home with a nice book and a warm cup of coffee…

Saby Waraich, Sr. Technology Program Manager, City of Portland
Saby will be speaking at the IRM UK Business Change & Transformation Conference Europe 16-18 March 2020, London
He will be speaking on the subject, ‘Have You Ever Jumped from an Airplane? Journey of Delivering a Complex Project/Program in Public Sector‘

However, like with so many challenging situations in life – despite the fear you feel and the visceral awareness of the risk you’re about to take – it’s important to remember that you have a good reason for choosing to take this literal leap.

In the moment before you walk to the open door of the fuselage, you center your mind on the reasons that brought you to this choice; you focus on your Why. You made the commitment to yourself before ever even boarding this plane – you are going to walk through your fear and accomplish this goal. You feel a spark of determination burning and know that the only thing standing between you and success is seeing your commitment through.

Even though your sweaty palms and speeding heart are trying to talk you out of this choice, you’ve already made the decision to jump. So you focus on your motivation, picture your goal – your WHY – and walk toward the bright sliver of light in front of you.

You take a deep breath, hold your vision closely, and fall forward in trust.

While making the decision to manage a challenging technology project that had failed multiple times and had been struggling for many years, may be a slightly different experience than jumping out of a speeding plane, I’ve been a bit surprised at the amount of thematic overlap.

I was managing PMO for City of Portland and was enjoying that role. During one of my check-ins, my boss (CTO at City of Portland) asked me a question – Have you ever jumped from a plane? My answer was NO! His follow up question – Would you like to jump? How about leading POPS (Portland Online Permitting System) program for City of Portland? My answer was NO but let me think. The question was WHY should I take on that project? Many times, we feel this situation and I was struggling to find an answer. It was a scary proposition, and effort would be leaving my comfort zone into fear. I started looking for excuses. I reached out to my mentor, who built the confidence in me, “If anyone can do it, you can Saby!” Still not enough for me. Went back home and talked to wife about possible long hours, stress and missing kids’ games and events (another excuse). She was very supportive and was confident of me to deliver on this complex program. I was still struggling to find my WHY! The weekend was over, and I went back to office, still without an answer. Time was running out and I had to give an answer to my boss. While I was checking my email, I saw an email from my daughter. She must have overheard my conversation with my wife. She did her research and wrote “Daddy, if a project has failed multiple times and it’s a political mess, here are few things that you can do…….” That was the WHY, I was looking for. She’s 10 years old and was looking at me as a role model to deliver. How can I let her down now? I just went to my boss’s office and confirmed to take on the new role.

I joined the City of Portland, Oregon’s technology project with the goal of transforming a paper-based permitting system to a paperless and efficient new model, I made a commitment to myself to see the effort through to the end. From the very beginning, I found and focused on my Why, and then held onto it to for dear life.

I held onto that determination as the project continued to move forward. In the end, it was a strong enough Why to anchor and guide me through the tough times ahead.

People lose their WAY if they don’t know their WHY

In 2008 and 2009, leaders within the City of Portland’s Bureau of Development Services began to see the need to upgrade TRACS (Portland’s legacy permitting system) and move to a more efficient, web-based paperless process for development review. This realization came into further focus came as the Bureau faced dire consequences from the late 2000 economic recession; leaders were forced to reduce staffing levels in response economic developments, and staff resources were lean. This provided a pressing motivation for considering new technology solutions.

The Director’s Office developed and implemented some changes focusing on how to maintain the highest possible level of services to permitting and land use customers, as well as the general public. The list included a recommendation to explore how to increase staff savings through technology improvements and increased efficiencies. This was the beginning of what would eventually evolve to become the Portland Online Permitting System (POPS) project.

In the fall of 2009, BDS worked with the Bureau of Technology Services to evaluate the Bureau’s existing PCMS and alternative systems being used by jurisdictions of similar size in the United States and Canada. Two jurisdictions had potential software candidates based on functionality and were visited to determine if their systems could meet the bureau’s needs.

The State of Oregon’s electronic building, permitting, and inspection information management system, ePermitting System, was also evaluated as part of this process.  After some deliberation, the evaluation determined that the State of Oregon’s Building Codes Division (BCD) vendor, had the best software system and ability to meet the bureau’s stated goal of being a full-service jurisdiction of the State’s ePermitting System.

In November 2010, the City Council approved an ordinance, which authorized the Bureau to negotiate an intergovernmental agreement (IGA) with the State of Oregon. The authorization allowed Portland to enter into a sole-source contract with vendor, outlining the implementation and support of a new City of Portland permit and land use review tracking software system in coordination with the state’s ePermitting system.

In 2011, the Bureau was reassigned to new Commissioner. Throughout the spring and early summer of 2011, Commissioner’s Office performed a review of the program, at that point called ITAP, and its processes to date; then met with representatives. Based on the review by the Commissioner’s Office, as well as discussions with Bureau Director and the ITAP Management Team, it was determined that the benefits of becoming a full-service jurisdiction of the State’s ePermitting System through a sole-source process will not work for the City.

With a renewed focus on taxpayer needs, and in order to ensure that the best permitting software solution was being selected for the City of Portland, the Bureau initiated an open and competitive request for proposals (RFP) process.

Fast forward five years. I took over the program in February 2018, after the bureau had experienced several years of programmatic challenges and repeated delays. After attending a few meetings, I quickly came to find that people had been waiting for several key decisions to be made… and that was inhibiting forward momentum of the program. Once those decisions were made, individuals were able to move forward with enhanced clarity and understanding.

We started by creating a high-level Program Roadmap for clear communication. Working with bureau leaders, we defined both Business and Technology objectives for the program. Stakeholders were identified, and both Directors were able to provide important direction as Co-sponsors.

Next, we started identifying gaps in both skills and technology, brainstorming potential solutions and moving forward to iterate as needed. As we began to fill gaps in the program, enhance communication, provide clear direction, and identify clear outcomes, pieces started falling into place. Working under immense pressure, we had a looming deadline; we were to appear in front of the Portland City Council in July and deliver a win.

With speed our priority, we quickly transitioned from planning to executing. Focusing on agility, we hit the ground running and let the momentum push us forward.

Come join me at IRM UK Business Change and Transformation conference on January 17th to hear about some stories of obstacles and wins during the journey of this project.

Energetic … engaging … lively … enthusiastic … inspiring … words that are often used to describe Saby. A speaker with the uncanny ability to look at the normal and see something quite different. Saby shares his life stories and has a fun way to look at life as well as live life. You are guaranteed to learn a thing or two on your journey from his unique perspective. Saby is a Technology Leader, Angel Investor, Professor, Mentor, Coach, Project & Program Management Expert, Change Leader and Volunteer Leader with a diverse experience of about 20 years in both public and private sector. An international recognised speaker, trainer, and coach, Saby has assisted multiple diverse clients in their business transformation through project successes, bolstering communications across various departments, and assisted customers in creating effective solutions to complex problems. Saby is currently working as Senior Technology Manager at City of Portland and as an adjunct Professor at Portland Community of College. He speaks 4 languages, enjoys working with people, and brings enthusiasm, inspiration and leadership qualities.