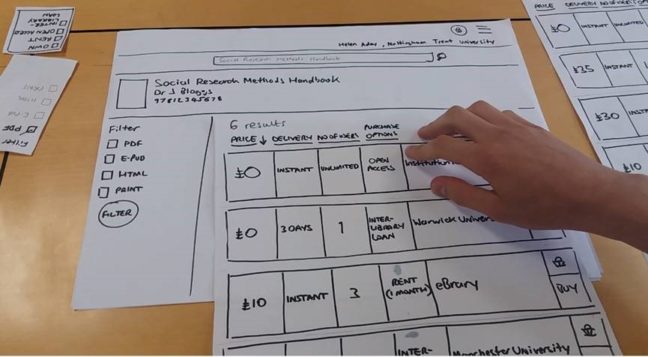 As the first head of innovation at Emerald Publishing, Bec Evans had the opportunity to shape the role to suit her and the business. What she thought would be a very product-focused role, turned out to be something completely different – about changing the culture. And workshops played a big part in discovering that.

Alison will be speaking at the Innovation, Business Change & Transformation Conference Europe, 19-21 March 2018. She will be presenting a workshop on 19 March on the topic of Making Innovation Happen: Building a Culture of Collaboration.
This article was previously published here.

Emerald Publishing is a global academic publisher that specialises in business and management. Although it had a very traditional business model, it became interested in bringing new techniques such as lean and agile and encouraging an intrapreneurial mindset within the company.

Emerald offered Bec Evans, who had her own startup on the side, the new head of innovation role, which she had the opportunity to shape herself. Coming from a part-time position in the product development and innovation department, Bec started off by making a call for ideas from across the company. However, she soon realised that this was the wrong approach:

“People thought “ooh, she’s innovation, so she can make all of these ideas happen”. And I got to a point where I was just feeling overwhelmed with people handing stuff over rather than taking it forward themselves.”

Emerald didn’t just need new product ideas. It also needed to create a culture that enabled innovation and empowered people, but it lacked the systems and skills to make that happen.

Workshops as a way forward

Bec found the first year of the role frustrating, and she wasn’t getting the results she expected. So she halted her efforts by going into what she called “stealth mode” to experiment without the full scrutiny of the business.

What had worked was running workshops, she said:

“When people come together and build off others ideas they’re just always so much stronger. And you need different perspectives and views. It increases the energy and really maximises what people can do individually”.

She needed a different approach. As a strong believer in collaboration to mobilise people, Bec decided to use workshops to quietly influence the culture. 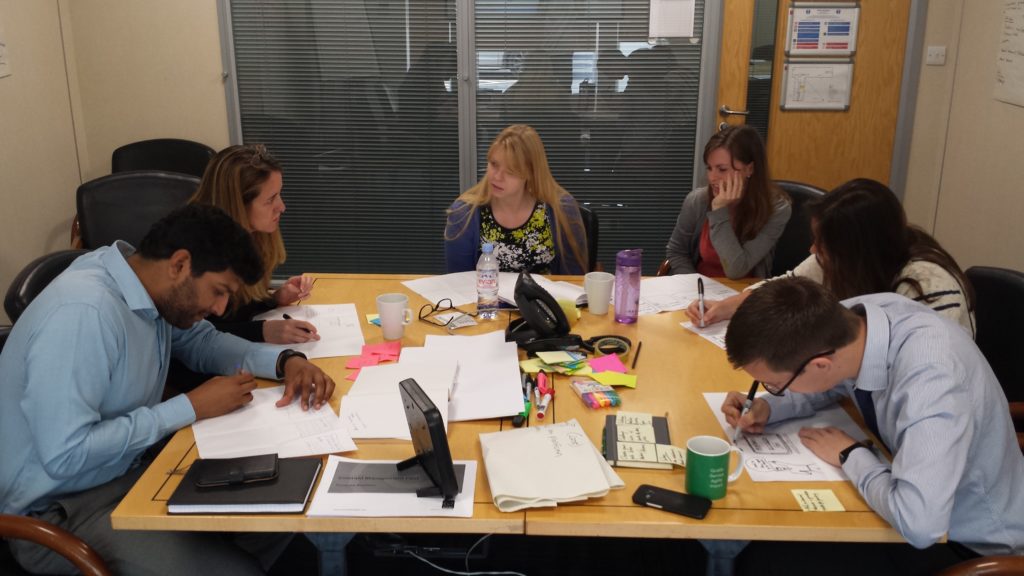 Bec designed a creative problem-solving workshop, with the help of Bracket. This one-hour session with teams was often “managed chaos”:

“The first 50 minutes everybody was talking, everybody sharing and everybody having an opinion. We’d be looking at the clock saying “we’re never going to pull this together”. But every single time, in the last 10 minutes we would come up with a really clear problem statement that galvanised people and gave them a real motivation”.

These problem-solving sessions encouraged teams to identify the daily challenges they were facing, such as “how do we cut down print at conferences?”, “how can we better communicate with our editors?”. It didn’t need to be about inventing the next $billion app.

Across Emerald, colleagues from all departments – finance, HR, editorial, marketing, and others that might not traditionally be involved in workshops – were learning new techniques for effective brainstorming. They started to see that it wasn’t just about sitting in a room and shouting out ideas. They learnt how to encourage participation and give everyone the chance to share their ideas. They began to understand what it meant to collaborate and build on each others’ ideas.

Gradually, the innovation team started to shift their image from one of an “ideas machine” to more of a catalyst and facilitator that supported teams to bring their own ideas to life.

Within six months, 1 in 3 of all staff had been to one of the workshops. There were no big announcements about the workshops or culture change. Working department by department, and across different teams and different ideas, the innovation team started to create ripples across Emerald:

“Because we weren’t being forced to communicate or prove our results early on, it helped to create a buzz. People were coming back from workshops and talking about it to colleagues, and it meant that we suddenly had lots of champions that we developed quietly.”

This organic approach also created the unintended but positive effect of recruiting an army of facilitators that would help out at workshops and events. Some workshops would have as many as 50-60 participants and needed co-facilitators to help guide small group discussions.

Some people would put themselves forward for the role, but Bec would also invite the less visible leaders who she knew would be good. Hierarchy didn’t matter – junior staff were able to facilitate a group of directors and do a great job. They would support each other and give feedback in quick standups after the workshops – reviewing what went well, what didn’t, and what they could do better next time. 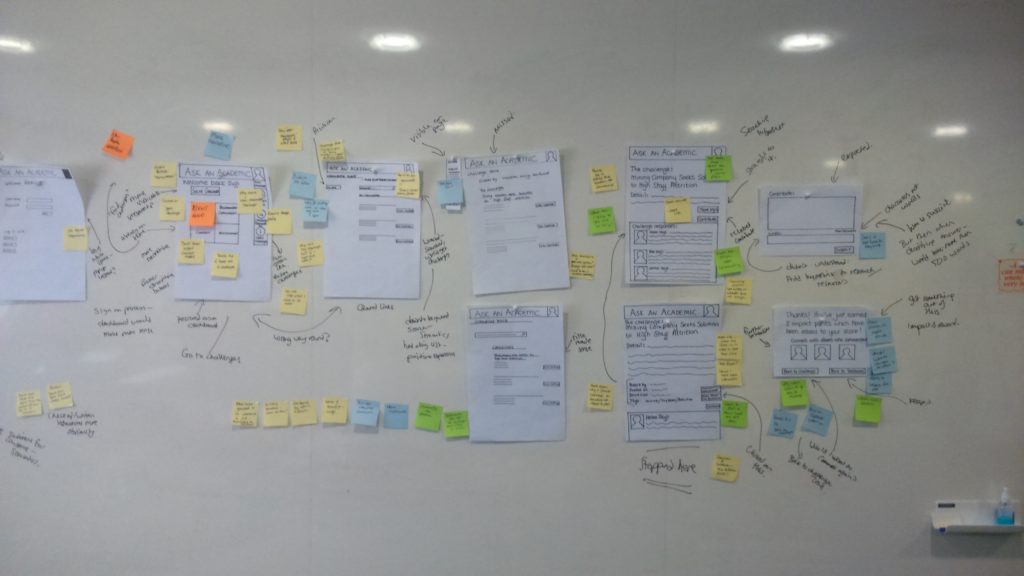 Collaboration – from extraordinary to ordinary

Today, Emerald looks very different to what it was four years ago. Collaboration is much easier, and very much part of the culture. The innovation team helped to accelerate this change through their workshops and by demonstrating new ways of working:

“[Workshops] went from being an extraordinary thing to something quite normal. We used to have an innovation box, and it was quite exciting when you used to crack it open with sharpies and coloured post-it notes. But now that wouldn’t be seen as strange in the slightest bit. People started turning up with post-it notes to meetings and would expect to stand up and cluster around a flipchart and whiteboard”.

This also started to also have an impact on the company from the top. Directors explored what kind of environment would support a collaborative culture. They encouraged practices such as agile methods and using Kanban boards, and updated technology and meeting room layouts to match.

Learning to let go and understand your strengths

Bec also developed a lot personally through this process. She would never have seen herself as a facilitator but surprised herself at how it built her confidence, and the skills she developed in communication.

One big challenge Bec faced was to facilitate a workshop for her Latin American colleagues in Brazil who had English as a second language. Bec facilitated in English, but the groups would speak in Spanish during the breakouts, and it went smoothly. She learnt that there was no need for her to micromanage and interfere:

“You have to believe people can do it. You nudge people on time and help when stuck, but it’s not up to you to solve the problem for them”.

Also, as an introvert, Bec realised that she preferred to hand over exercises like warmups and energisers to her colleague Kat Palmer, who was more extroverted. Between them, they were able to design and run workshops that appealed to both introverts and extroverts. 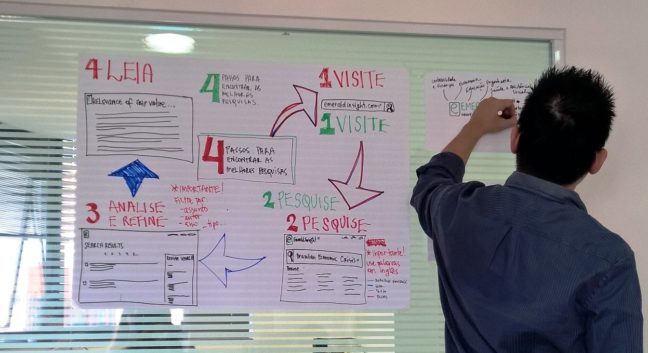 There are three top tips Bec would provide to someone looking to embark on a similar process:

1. Manage expectations. It’s always important to have clarity on the next steps. Workshops create an energetic, fun atmosphere, so people love attending them. But they can get disappointed if they don’t know what’s going to happen afterwards.

2. Agree on values within your team. The innovation team would speak a lot about their ‘rules’ and communicate them out to people during workshops. For example, in brainstorming, it was important to encourage ideas from everyone, so they emphasised quantity over quality, sharing ideas and not judging ideas at the early stages. They were even as specific to say that spelling mistakes didn’t matter so that people didn’t feel conscious about sharing their ideas on post-it notes or a whiteboard.

3. Start small. After an initial frustrating year, Bec gave herself permission to go out and start doing something new. There was no big plan or strategy, just an aim to prove impact. By running workshops across the company with different teams and departments, the innovation team were able to learn and figure out what worked and what didn’t. It meant that by the time they were ready for a more formal launch, they already had a great backlog of good case studies and ideas that had already happened.

“Give yourself permission to fail. Just throw off all those fears. If you spot something going wrong, don’t invest too much time in it. Just do it, review it, and do it better next time”.

Alison Coward is the founder of Bracket and author of “A Pocket Guide to Effective Workshops”. She is a strategist, trainer and workshop facilitator. With over 15 years’ experience of working in, leading and facilitating creative teams, Alison is passionate about finding the perfect balance between creativity and productivity. At Bracket she helps teams to use the best of their talents to develop great ideas and collaborate to make them happen.

After three and a half years leading innovation at Emerald Bec left the security of a job to turn her side hustle into a startup. Prolifiko – a digital writing coach for writers everywhere – was accepted on to the Ignite accelerator in summer 2017 and the new product launches early in 2018.