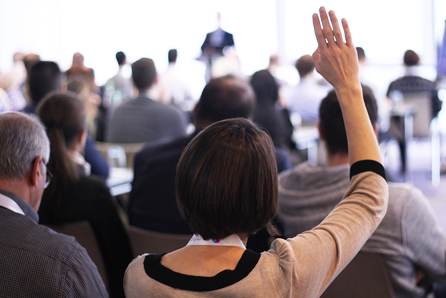 The UK might be leaving the European Union, but there is a corner of London near Marble Arch where data professionals from across Europe will gather to share ideas and experiences. 2018’s co-located Enterprise Data and Business Intelligence & Analytics conferences  took place at the Radisson Blu Hotel in Portman Square in November, under the joint (Belgian and Dutch) chairmanship of Jan Henderyckx, Partner at Bearing Point and independent consultant Rick Van der Lans.

Delegates had over 30 presentations to choose from, delivered by data management and BI experts and practitioners. Here, we’ve picked out four themes that stood out at the twin conferences:  breaking down data siloes; dealing with the necessary ambiguity of data; data science laboratories being a poor model for enterprise data; and ethics as an increasingly important issue for data professionals.

In her talk, “Making data mainstream”, Amy Balmain, head of data exploitation at UK water company Southern Water, talked about how the centralisation of the data team there has been, recently, advancing decision making throughout the organisation.

Southern Water manages the supply of water and waste management to 4.5 million people in a geographic area that covers Hampshire, the Isle of Wight, West Sussex, East Sussex and Kent. Its assets include 83 water treatment works, almost 14km of water mains, 2,375 pumping stations, and 39.6km on sewers.

Its data is varied and complex, some of it about assets that are two hundred years old. It has 80,000 telemetry points returning data every 15 minutes.

Previously, Southern Water had what Balmain described as “pockets of people doing data and analytics work, but within individual departments”. As well as pooling its data specialists, the organisation has made some new software investments – in cloud BI technology from Birst, and ETL tooling from Wherescape. They are also using Microsoft Azure for the cloud storage of data science activities.

But the main initiative has been to get a better skilled workforce with a greater understanding of data – to improve data literacy in the organization, as well as developing the core data cadre.

Balmain, who reports into the IT function at Southern Water, manages a data team of around 25 people – data scientists and analysts – that works both on its own and with IT to improve decision making throughout the organisation, which employs nearly 3000 people and has around 1500 contractors in its ambit.

The ambiguity of data

That data in business should be treated as the starting point for conversations that can yield organisational knowledge was a big theme of Donald Farmer’s keynote talk. Farmer – well known from his spells as a leading figure at Microsoft and Qlik – placed a strong emphasis on raising the level of data literacy at the level of a whole entity – such as a specific society or organisation – as being crucial to getting value from data. It’s not about improving this or that individual’s grasp of statistics, say, but of raising the sophistication of the social organism of which he or she is part – whether that is a bank or a fishing community in India.

He stressed how important environment is to our learning, whether that is learning to read by scrutinizing a cereal box as a child, or learning to understand the significance of data by using sleep tracker and health apps on a daily basis. He made the point that the health apps of today would seem amazing if they were BI dashboards of even ten years ago. “That’s how much we’ve come on. And these apps need no end-user training: they [their outputs] are just being absorbed. As our society becomes more data literate you will see more examples of data entering our everyday lives”.

Inside corporate organisations, Farmer urged delegates to “explore data and encourage the freedom to debate. The ability to debate, disagree, bring different interpretations to bear, this is where value lies. This is why diversity is so important. It is not about individuals, but organisations”.

Alexander Borek, Global Head of Data & Analytics at Volkswagen Financial Services, addressed the issue of how the sophisticated data science units that have, in recent years, arisen in organisations keen to capitalize on their data assets can be properly harnessed to create business value.

His keynote talk, “Data Science for Grown ups: how to get machine learning out of the lab to scale it across the enterprise” pivoted around a crucial matter for traditional organisations eager to learn from digital natives, such as Amazon, Google, Netflix, and Uber. The latter seem to have been born using data science and machine learning at scale; the former – while they have invested heavily in big data science in recent years – seem destined to tinker at the edges of their business processes. Why is that?

Borek made a compelling case that the entire model of a data science “laboratory” is misconceived, at least in traditional organisations. This is because the environment outside the lab is very different to that within. In the “outside” world of the company and its business lie legacy IT systems, interdictions on cloud usage, data protection regulations, and the rest. “And a lot of data scientists don’t know how their companies run”.

Instead, he advocated a factory-style data and AI platform approach that can become a bridge between the inside of the lab and the outside of the organisation. Data scientists and AI developers would pass on their models to data engineers, in an AI and data DevOps model in which a data and AI product manager becomes the key intermediary, on Borek’s account. Otherwise, he joked, the data scientist leaves the “space capsule” of the data lab only to die in the void of corporate space.

The only way is Ethics

The ethics of data exploitation was dramatically thrown into relief last year in the notorious Cambridge Analytica controversy, where that company allegedly used Facebook data to influence the 2016 US presidential election and, possibly, the 2016 UK EU referendum. “Just because you can, does not mean you should” has been a maxim much on the minds of data scientists – young ones especially, graduating from the new breed of data science Masters degree courses.

Daragh drew on his book, Ethical Data and Information Management: Concepts, Tools and Methods, co-authored with Katherine O’Keefe, in his keynote talk, “Ethics Schmethics, Indians Schmindians”. He argued we habitually fail to correctly identify risks, just as the US cavalry underestimated the Sioux and the Chinese and others Genghis Khan. “I was only building an app” or “only building a process” is all too reminiscent of the Nuremberg war criminal defence of only obeying orders.

Codes of ethics that are mere box-ticking exercises do not work, he said. Enron had a 64 page ethics manual and their accounting staff were all signed up to professional bodies, and their standards. It was no redoubt against the systematic fraud scandal that swept it from history. Instead ethical standards have to be baked into the culture of organisations. O’Brien quoted Michael Higgins, president of Ireland: “the proliferation of ethical manuals and codes of conduct in the various professional sectors will only be of limited consequence if we do not also that their purpose is embraced and understood by, and not just enforced upon, those for whom they are designed”.

O’Brien said he sees positive signs of ethical awakening among newer generations of technology workers, who want to devote themselves to organisations with a purpose. Google engineers have resigned in the face of the company’s decision to build a China-specific search engine. Microsoft has walked away from a $10bn Defence contract in the US. “Their staff did not want do it” he stated.

IRM UK is running other data conferences in 2019. First up are the linked Master Data Management and Data Governance conferences, co-located at the same Radisson Blu Portman hotel venue, 13-16 May.

About IRM UK; IRM UK specialises in strategic business and IT training for business and IT professionals and management. Since 1999 when IRM UK was founded, over 25,000 professionals from over 2,000 organisations worldwide have attended our events. Noted for the participation of middle management and top-level decision makers from both the corporate, user and vendor communities, and the lucid analysis of critical strategic and management issues, our events are condensed and rigorous combining technical explanations with management advice and discussions of future directions.