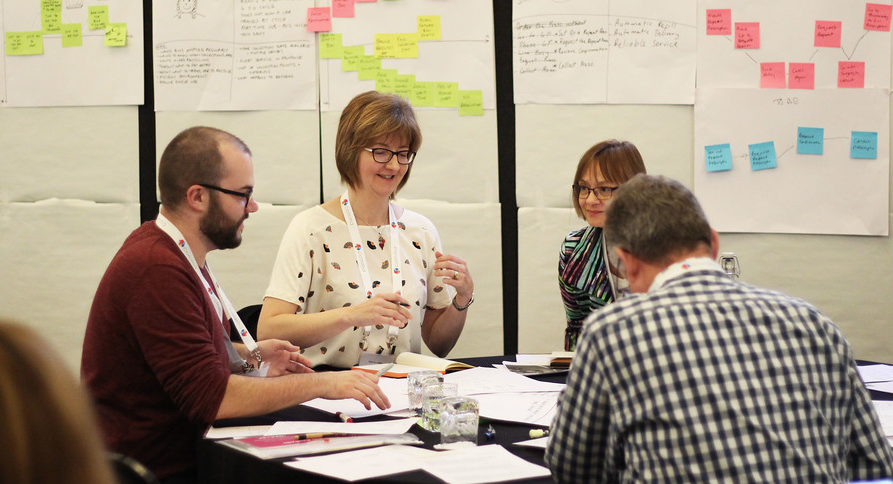 Business Analysts work with facts. It’s probably fair to say that our whole lives are dedicated to finding them out, whether it’s researching requirements, scoping problems or designing solutions (that will actually work!). We are dedicated to providing the organisation with clarity on their business process and system questions, challenging unhelpful opinions and assumptions, so good investment decisions can be made.

At first glance, emotions have no place in our world. They distort facts and create complications for us. A solution is right, or it’s wrong. How many times – and be honest now – have you said something like “Here, Mr Sceptical Stakeholder, let me present you with some FACTS to convince you of the validity of my recommendations”? Then if they’re still not convinced, you present them with even more facts! What’s needed in these situations is not just more facts, but influence. And influence derives from something we call “Emotional Intelligence”. But what is it?

Emotional Intelligence (EI) is a term created by two social psychology researchers – Peter Salovey and John Mayer – but brought to international attention by Daniel Goleman in his 1996 book “Emotional Intelligence”[i]. It is defined as the ability to recognise, understand and manage our own emotions and to recognise, understand and influence the emotions of others. When you have a high degree of emotional intelligence, you know what you’re feeling, what your emotions mean, and how these emotions can affect other people. The good news is that unlike your IQ, which is fixed (something you’re born with) – your EQ can be actively developed. By simply taking steps to develop your EQ, you are automatically becoming more influential. 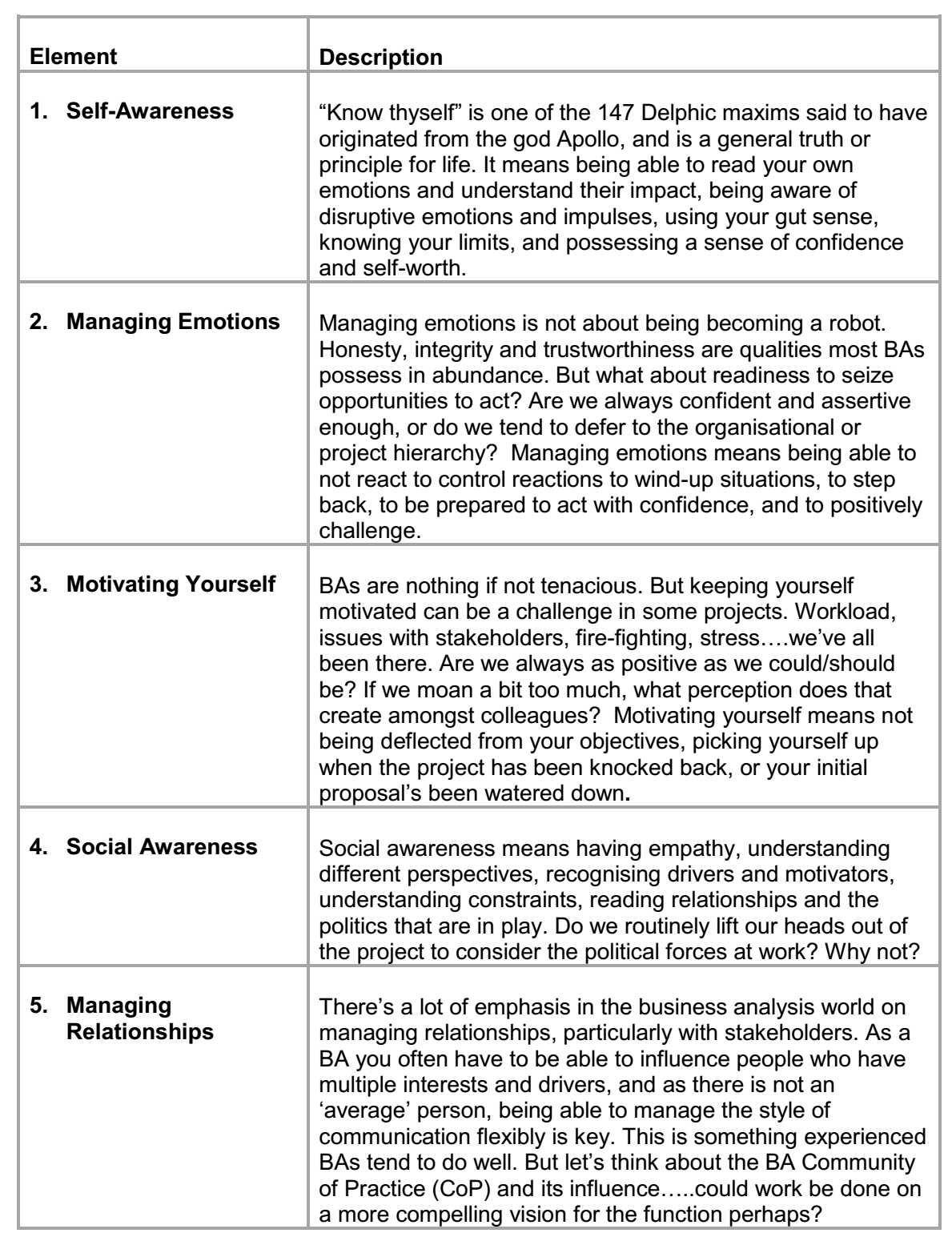 In considering these five elements and the work conducted by a BA community, we can see that it’s critically important that BAs are emotionally as well as intellectually intelligent. To get to all the facts and data, we need to work with people up, down and across the business. We need to be able to engage senior stakeholders so they open up and share their concerns, fears and hopes. We then need to persuade them of the rightness of our solutions and sometimes be the bearers of unwelcome news. Often, we might need to step in and resolve conflict between key stakeholders, whilst not taking personally any flack directed at us, or our team.  We may also have to assume a leadership role, plugging resource or skills gaps in the project.

Two of the most astounding recent examples come from the world of politics. Both the Trump election campaign in the USA and the Leave referendum campaign in the UK focussed on messages which would appeal to their target audiences by leveraging their hopes, playing to their cognitive biases and their fears. It’s been extensively reported that both the Trump and Leave campaigns invested significant sums of money in the psychological profiling of target voter groups, then used the data captured to craft key campaign messages to powerfully engage them. Ethics aside, what is unquestionable is that as a result of this strategy of appealing to voters’ emotions rather than their intellects, both campaigns were successful beyond anyone’s expectations. Many respected political commentators on both sides of the Atlantic said that the success of the campaigns actually defied all logic! If you’re interested in Emotional Intelligence and how it might be used as a BA tool for achieving a wider influence, researching these two campaigns and how they operated will give you much food for thought.

When you understand how emotions work as a Business Analysis community, from all these perspectives, you can actively use them to:

• Improve & guide your thinking
• Remove barriers to working with others in the organisation
• Transform change, problems and conflicts into opportunities
• Assist your CoP in achieving success
• Build your powers of influence and persuasion

But how do you go about building the emotional intelligence of your CoP? Where do you start?

The first step is, as always, “know thyself”, so check in with your own EQ. Undertake a personal SWOT Analysis using Goleman’s Five Elements and ask others (whom you can trust) for their feedback. Be an observer of your own emotional responses to people and situations, and breathe, pause and reflect before taking action. Keep yourself motivated by focussing on the small wins – there will be a reason to celebrate something most days. Observe body language, as well as actively listening, when working with stakeholders. This will give you clues as to the real meaning behind their words – is another agenda at play, than the one stated? But continue to work on building trust and rapport, and managing conflict. Always look for opportunities to network, both within and outside your organisation, to build your self-confidence.

When you’ve analysed your own emotional intelligence levels, you can make EI a topic for discussion and exploration with your wider CoP. Using the Emotional Intelligence Competency Framework[i] as a reference, you can pose the following questions:

• What does working in an “emotionally intelligent way” mean in our organisation?
• Where does the BA community feel it could improve?
• What would be the benefits of doing so?

Working in a more emotionally intelligent way, doesn’t mean re-inventing the wheel. For example, one of the finalists for the 2018 BA of the Year Award decided to re-name “Most Valuable Product” to “Most Lovable Product” and use the “Heart Maps” tool in her project. When combined with taking the time to physically observe a group of resistant and sceptical end-users as they worked with the system (getting to know them at a more personal level), she was able to fully engage them with the project and achieve results that had proved impossible in the past.

In summary, Emotional Intelligence is a key tool which can help a BA Community of Practice build its influence in an organisation, so it’s not just seen as a ‘niche’ specialism within an IT project, but is recognised for having potential to deliver much wider, more strategic business value, outside the confines of IT, first and foremost as a business transformation function.

Richard is a highly experienced learning consultant, with over 25 years’ experience of working with international corporations in the design and delivery of talent development programmes. Richard’s particular specialism is in helping managers in IS and Finance develop the skills required to manage outsourced and offshored suppliers. Prior to moving into L&D, Richard enjoyed a successful career in sales management at executive levels, with predominantly US-owned multinationals. He is also the author of a time management book “Taming Time” published by Capita.

After an early career in hardware sales, Philippa moved into IT training, where she specialised in the consultancy, design and project management of large-scale user training programmes for blue-chip organisations. She grabbed an opportunity to move into business analysis, where she was able to use her skills to establish a BA-led training services outsourcing division, which grew to rapidly to a £10m+ turnover. For the past 12 years, as an executive director, Philippa has been helping customers worldwide to deliver change by developing the people skills of their managers. Passionate about the business analysis profession, Philippa is a judge for the Business Analyst of the Year Award and also co-authored the BCS book ‘The Human Touch – personal skills for professional success’.

[i] Copies of the EI Competency Framework are available on request from Skills Shift Ltd.